MADISON, Wis. — For technology companies to showcase the power of multiple sensors and low-power wireless chips, there is no better medium than wearable devices. These technologies are being designed into bracelets, eyewear, smart watches, and a host of other things that people put on and take off.

The past year has produced an onslaught of new (and sometimes odd-looking) wearable devices. The wave of these products has helped fuel the growing hype around wearable devices on the consumer market.

The high-tech industry continues to hold high hopes for its Internet of Things (IoT) — potentially turning every man on Earth into the end node of IoT through wearable devices. But for consumers to get used to the idea of wearing one of those devices to everywhere they go might still take time.

Similarly, the industry will also need more time, bringing down the size and cost of such wearable devices and developing applications and services to make the hardware more effective. Most important will be defining what these wearable gadgets are really for — beyond simply making those who wear them look cool, fit, young, different, and probably sort of twinkly.

The industry, however, is beginning to understand that they can just turn a smartphone into a tiny little device and call it “wearable.”

A case in point is today’s smart watches.

We’ve seen the industry take a serious crack at smart watches this year. Yet, thus far not a single smart watch has become a runaway success on the market.

The truth is that with leading consumer manufacturers including Samsung and Sony jumping on the bandwagon, the smart watch market, without producing clear winners, has turned into “a somewhat crowded affair,” as described by Nitin Bhas, analyst at Juniper Research, in its wearable market forecast report released earlier this week.

As the wearable market still remains in its early phase, the market forecast and product definition are also all over the map.

The upcoming 2014 International Consumer Electronics Show (CES) in Las Vegas will showcase a number of wearable devices. They range from a waterproof heads-up monitor for swimming goggle lenses to a brain-sensing headband and a wearable locator/phone designed for kids. 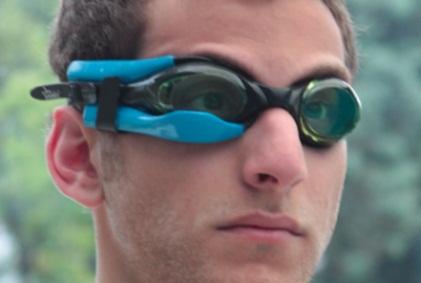 You can now visualize your heart rate zone in real-time on your lens while training. For example, the lens goes blue for fat burning, green for fitness, red for maximum performance. It also measures crucial training parameters, such as calories, laps, flip turns, and breathing pattern.

The goal is to optimize training and streamline performance.

METRO UK: The best in swimming tech from AR goggles to data analysis