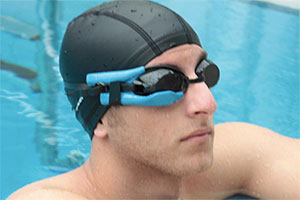 Runners and bikers have wearable devices to monitor their performance, but why not swimmers? That thought inspired Hind Hobeika, a swimmer and entrepreneur, to come up with a solution. Working with a team of developers, she has created Instabeat, a swim goggle-mounted monitor that tracks, stores, and displays instant feedback of your heart rate to reach your training goals. The device, which can attach to any pair of swim goggles, reads your heart rate from the temporal artery, getting rid of the chest belt used in other monitoring devices. A sensor automatically turns on when the device is placed on your head. It projects a color on your lenses in real-time to know how close you are from your target zone. Each color has three levels to indicate whether you are in the beginning, middle or upper limit of the zone. The device also measures calories burned, number of laps and flip turns, and syncs with your personal dashboard to track your progress over time. Hobeika’s company, also called Instabeat, recently raised $56,374 from an Indiegogo funding campaign, surpassing its goal by $21,374. Prototypes of the device have attracted glowing reviews from tech sites such as Mashable, which calls it “Google Glass and Nike FuelBand for Swimmers.” The device won the third prize of the Stars of Science competition in 2010 and first prize of the MIT Enterprise Forum Pan Arab Business Plan competition in 2012. Over the past year-and-half, the Instabeat team has developed seven different versions of the prototype. After extensive testing, they have settled on the current design and are ready to place their first production orders with manufacturers. Click here to see a video of Hind Hobeika’s Ted Talk about Instabeat.

Prototype to product: how to manage your manufacturing